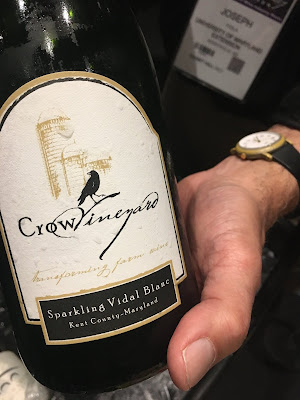 By Carlo De Vito
Recently I was at the Eastern Winery Exposition 2020. At the Grand Tasting on Tuesday night of the three day exposition, I was offered a tasting of the Crow Vineyard Sparkling Vidal 2017. I eagerly accepted.
Roy & Judy Crow are the owners of Crow Vineyards in Maryland. Lovely folks. I first wrote about them in 2013 but actually met them in 2017 at a tasting organized by Paul Vigna. It was there that I first tried their Sparkling Vidal (2014 vintage). As well as their Barbera Rose.
Crow Vineyard Sparkling Vidal 2017 is a special wine. This is an estate wine. 1.7 tons of  grapes were hand harvested on September 12, 2016.  This wine was made in using the traditional méthode champenoise. And it was bottled  in March 2018.
Now, the neat trick is that its made using Vidal Blanc, not your traditional choice for a quality sparkling wine. It almost makes me like it just for that. Vidal blanc (or simply Vidal) is a white grape variety produced from the Vitis vinifera variety Ugni blanc (also known as Trebbiano Toscano) and  Rayon d’Or (Seibel 4986). It is a very winter-hardy variety that manages to produce high sugar levels in cold climates with moderate to high acidity. There are many lovely wines made up and down the east coast with Vidal. Its tough as nails, fairly disease resistant, and makes wonderful aromatic wines. But being used in this sparkler brought out possibilities I was heretofore not aware of. Even a month later, I am still geeking out on this wine.
The wine was made by Michael Zollo. He was hired in May of 2017. According to the winer, “Michael Zollo grew up in wine. His father and grandfather made wine in their basement sharing the art with young Michael. After seven years as a home winemaker in the Finger Lakes region of New York State, he had the opportunity to go to California to pursue his hobby and passion professionally. His wine making skills were furthered with under the tutelage of Jacques Mercier at Solune Winegrowers.”
“I am enthusiastic to be named Winemaker at Crow Vineyard and look forward to establishing the Chesapeake Bay Area as the next great wine region,” wrote Zollo. Zollo worked with Crow’s wine consultant John Levenberg.
A lovely yeasty/bready note pops like a puff of exotic flour. This is quickly followed by green apple and pears, backed up with nectarine and honeysuckle.More tropical notes follow. Lovey lemon zest acidity keeps the wine honest and refreshing. A wonderfully aromatic sparkling with a fantastic flavor and great acidity. An incredible quality sparkling wine. Serve it to family, friends, and especially wine geeks, even aficionados. You will get nothing but compliments.
Loved this wine!

Please contact us by phone 302.304.0551 or via our Product Interest Form on each product page for questions on our products or to order. Dismiss